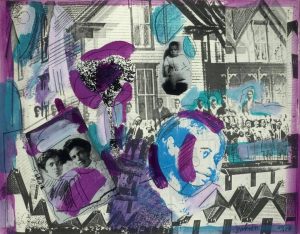 By and About Women highlights selected works from their extensive collection which were either created by female artists or feature women as the subject. Like their larger collection, this exhibition represents a comprehensive history of art-making in general, and African-American art, specifically. Sculpture, sketches, oils, acrylics, paintings, and collages fill the gallery.

Dr. Whitfield-Locke is passionate about collecting and has filled their home with art by master African-American artists working during the last 100 years. She has served on the board of the International Review of African American Art, the most significant publication in the field — now based at Hampton University - and has been a major supporter of the James Porter Colloquium at Howard University and the David Driskell Center at the University of Maryland.

About the Curator
Dr. Michael D. Harris is an artist, scholar, curator and professor presently teaching at Emory University in Atlanta. As a scholar, Harris has published Colored Pictures: Race and Visual Representation (2003) and has contributed to or co-authored a number of other publications. He has had articles on contemporary African art and African-American art published in a number of books and journals.

Harris is among the few African-American scholars to hold terminal degrees in studio art, African-American Studies and in art history. Also a practicing artist, Harris has been a member of the artist collective AfriCOBRA, the African Commune of Bad Relevant Artists, since 1979 and has exhibited across the United States, in the Caribbean, and in Europe. His work is represented in the collections of Morehouse College, Howard University, University of North Carolina, the City of Atlanta, the Hampton University Museum, Dillard University, the David Driskell Center at the University of Maryland, College Park, the Paul R. Jones Collection of American Art at University of Alabama, the Atlanta airport and in many private collections. Dr. Harris earned his BA in Education at Bowling Green State University; MFA in Painting, Howard University; MA in African-American Studies, Yale; MA, MPhil, and Ph.D. in History of Art from Yale University.